Around Tonkin and Siam

Wide Eyes in Burma and Thailand 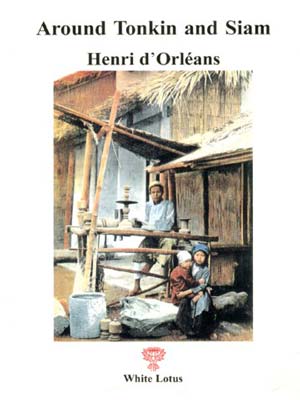 Around Tonkin and Siam

A French Colonialist View of Tonkin, Laos and Sian (1892)
Prince Henri d’Orléans’s political statement on the future of the French trade and territorial expansion in Indochina is partly a travelog of areas visited: Hanoi, the Red River regions, the Upper Black River to Lai Chau, Luang Prabang and parts of Siam, and partly a political interpretation of the information gathered. The author’s interests range far and wide in the domains of commerce and industry of any kind that might turn out to be profitable for France’s colonial adventure in the Far East. He is also adept at canvassing political support with the local rulers, among whom the legendary Déo Van Tri is the best known. He visited and described several so-called hill tribes: Yao, Kha, Sa, Yan, and others. The book is illustrated, and some of the illustrations show rare settings. Although variable in quality, these provide some idea of the “primitive” state of these future French subjects.