Burma-Thailand Railway: Memory and History, The

Essence of Cultural Relics of Yunnan Railway Museum, the

When you come to Java Travel by the State Railways 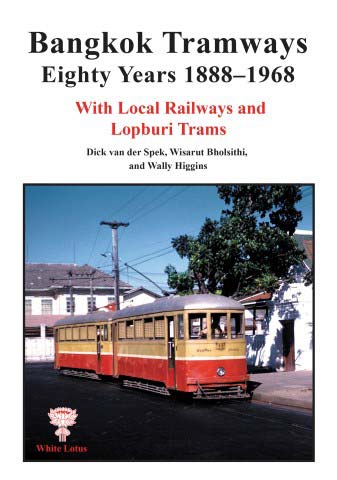 With Local Railways and Lopburi Trams

Trams of Bangkok, Eighty Years 1888-1968, is the first work tracing the history of trams in Bangkok, a pioneering work with Danish and Belgian involvement. Thailand was the second country in Southeast Asia with trams. First, horse-drawn trams appeared in 1888. But as horse-drawn trams were not very suitable in the tropics, they were replaced in 1893 by electric trams. (In that same year, the French attacked Siam in what became known as the Paknam Incident.) The resulting electric tram company, with its own generators, was one of the oldest in Southeast Asia. The Dutch introduced trams in Batavia (Jakarta) in 1869. Singapore followed in July 1905, after having experimented with electric tramways in 1891 and 1892. In 1893, Bangkok had a population of 250,000. The trams became quite popular with the people. The author made new drawings of all the tram lines. He has located the best information available on the electric tram cars, as the archives are poor. In the 1960s, trams became obsolete as buses took over. A renewal program of the rolling stock and new kinds of tram cars came too late. Buses were already duplicating the tram lines. The Thais liked to follow the American model, favoring road traffic over rail traffic. But now, realizing that this is not an ideal solution, Skytrain and subway lines are being built in Bangkok.