Brief and Truthful Relation of Events in the Kingdom of Cambodia, A

Save for Later
SIMILAR BOOKS Show All
Jennar, Raoul M.

Cambodian Gamble: Three Months of Negotiation Towards a Peace Fraught with Dangers

Important Japanese and Other Asian Works of Art 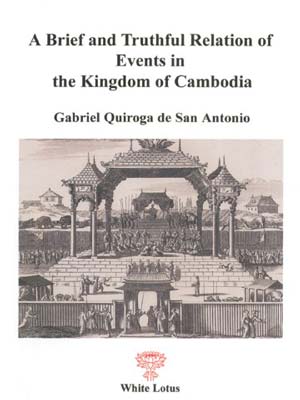 Brief and Truthful Relation of Events in the Kingdom of Cambodia, A

This is one of the earliest accounts of Cambodia and other destination countries of early missionaries in the region. More specifically it is the account with which Gabriel Quiroga de San Antonio, a Dominican missionary, attempted to draw the King of Spain into conquering the country in 1604. The book was introduced by the eminent French scholar, Antoine Cabaton and is translated into English, from the French edition of 1914, for the first time. It deals with the internal political turmoil in Cambodia and with attempts of the Portuguese, Spanish and Siamese to take advantage of the situation. Within the context of the geopolitics of the time, the author also describes other countries in which such trade rivalry was in progress and their rulers, e.g., Siam, the Moluccas, the Kingdoms of Champa and Cochinchina and the Philippines. Father Gabriel de San Antonio explicitly places his peregrinations around Asia in the context of the foundation of missionary and trading posts. This book is a must for scholars of Cambodia and for all those who want to better comprehend the troubled history of this country.