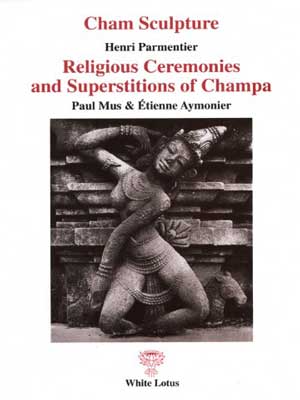 The first report in this book offers an overview of Cham art with sixty-five photographs and an introductory text by the eminent French archaeologist Henri Parmentier. Originally published in 1922, this book remains one of the best introductions to the treasures preserved in the Tourane Museum in Danang. It features splendid photographs of Cham art discovered in the main areas of this long lost culture—Mi Son, Dong Duong, Khuong My, and Tra Kieu. The development of Cham art is sketched against the background of Annamese migration pushing the Cham people and their kingdom ever further south. The second part consists of two research reports. The first one by Paul Mus summarizes what is known about the religious practices of the Cham people and is based on artifacts and translated inscriptions. The author also reviews evidence from contemporary Cham culture. The religious inheritance of Champa is related to Vedic, Indian, Chinese, and Annamese forms of worship, and the significance of the Champa king as intermediary between the gods and the soil is also discussed. The second report by Étienne Aymonier contains an overview, dated 1884-85, of the religious practices, ceremonies related to veneration of divinities, marriage, birth, priesthood, death, agriculture, collection of eagle wood, and other customs of both groups of Chams, Muslims and non-Muslims, in Vietnam, and Chams in Cambodia.