Save for Later
SIMILAR BOOKS Show All
Nidda Hongwiwat 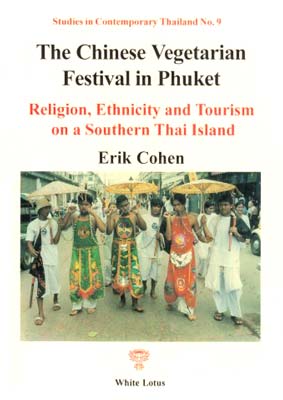 Religion, Ethnicity and Tourism on a Southern Thai Island Studies in Contemporary Thailand No. 9

This vegetarian festival is the most popular and complex religious event in southern Thailand. In this richly illustrated work, Erik Cohen presents a detailed ethnography of the festival based on extended fieldwork conducted in the course of the 1990s. The focus of Cohen’s analysis is the interrelationship between the dynamics of the festival, Chinese ethnicity in contemporary Thailand and the development of tourism on the island of Phuket. The study shows that, though the festival expanded considerably in recent times and became increasingly spectacular, its fundamental structure manifests a surprising degree of continuity, even as its meaning increasingly changes from a devotional ritual to a public spectacle. Surprisingly, however, the growing popularity of the festival is due less to foreign tourism on the island, and more to a growing attraction of the festival for the Thai and foreign Chinese believers and visitors, in quest of an “authentic” Chinese festival which cannot be seen anymore even in contemporary China.
USD 27.50