Description of the Thai Kingdom or Siam

Save for Later
SIMILAR BOOKS Show All
Kacha and Chai Ratchawat

Life of the Lord Buddha from Thai Mural Painting, The 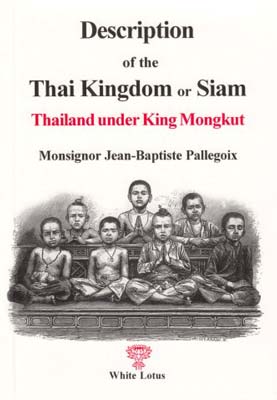 Description of the Thai Kingdom or Siam

This account gives a complete overview of the basic features of the Thai people and of Thailand during the reign of King Mongkut. The description is directed at laymen in Western countries at a time when only a few travelogues on the Orient, written by traders and missionaries, reached the West. Monsignor Jean-Baptiste Pallegoix, for many years a missionary working in Siam and later Bishop of Siam and neighboring countries, elaborates on the daily life of the Siamese and on physical features of the country, and its flora and fauna in the early 1830s. He describes the juridical and political institutions of the Thai state, including its elaborate system of nobility, and officials, serfs and slaves, its arts and crafts, and the growing agricultural production and exports of a nascent economy. As a Roman Catholic bishop he had a keen eye for the religion and history of the Thai people with respect to the likelihood of conversions to Christianity. Thai Buddhism and superstitions are treated in great detail, and the foundations and rules of this religion are provided for laymen. The book provides an elaborate account of important events in the history of the country starting with the arrival of the first French missionaries—for example the behind-the-scene moves in the revolution of 1688 and King Narai’s relations with the French priests and his embassies to France—and concludes with an extensive description of the state of the Catholic Church in Siam around 1850.
USD 24.50