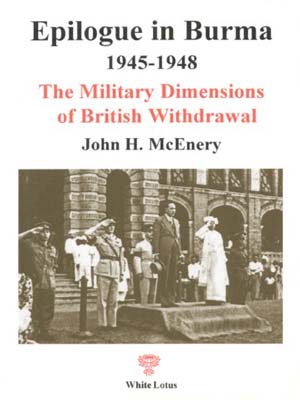 The Military Dimensions of British Withdrawal

This book presents the first fully-researched account of the Army’s dramatic role in war-torn Burma from Japanese surrender to final evacuation. It presents the achievements of the British, African, Indian Army and Burma Army units of Burma Command. The most important of these was the suppression in February-April 1947 of an incipient “dacoit dictatorship” in central Burma aimed at subverting the moderate government of Aung San, the Burman national hero. The book also records what happened to the losers, the 70,000 surrendered Japanese troops. Beyond that, new light is thrown on the tragic assassinations of Aung San and most of his ministerial colleagues in July 1947, absolving the British authorities and HQ Burma Command of any vestige of responsibility or blame. The work sets out an accurate statement of force levels in Burma in 1945-48. In so doing it discredits the lamentably false picture presented by the HM Stationery Office official history, Burma—The Struggle for Independence 1944-1948. Using a hitherto unpublished and revealing top secret document, the author gives a badly needed re-appraisal of the last two British Governors of Burma. Finally, General Briggs, the General Officer Commanding, emerges as the unsung hero whose quiet determination avoided a Vietnam in Burma. This account of a peaceful transfer of power in difficult and dangerous circumstances may help a new generation in Burma on their hard road to democracy and national reconciliation. It is an absorbing and long-overdue tribute to the men and women who served in the armed forces of the Crown in post-war Burma.
USD 18.00