Save for Later
SIMILAR BOOKS Show All
Preecha Kanchanakom 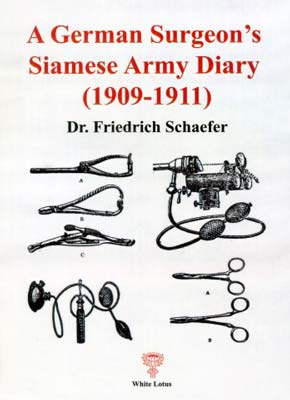 Friedrich Schaefer; A German Surgeon’s Siamese Army Diary (1909-1911)
is the diary of a Prussian army doctor recruited by the Siamese to build up a medical services department for the army. The army had been reorganized and greatly expanded, but in line with the general state of medicine and especially surgery in the country, the troops were not adequately cared for. Dr. Schaefer, who had served the Prussian army and the Russian Czar, was recruited with an eye on improving military hospitals, but he ended up introducing modern surgery. He was instrumental in setting up improved military hospitals both in Bangkok and in the countryside and contributed greatly to the foundation of education in medicine and surgery. The Red Cross Society was another of his domains of work. The period of time in which he was serving saw the advent of industrial rice milling, the appearance of the trademark “Siam Rice” on world markets, and the consequent rise of beriberi, for which the scientific debate about its resolution is also documented in his diary. Schaefer also engaged in research; e.g. hunting a new human parasite. Besides the medical aspects of his work, which deal with plague, cholera and smallpox as the main epidemic diseases of the time, his astute observations on the politics, both internal and in the face of English-French-German colonial rivalry, cannot be found elsewhere. China was standing by and quietly conquering the channels to business wealth, even if immigrant Chinese went on strike in Bangkok. As a well-connected surgeon he met most Siamese personalities of the time and cut across all social classes in his medical practice. His keen eye documents natural phenomena in Bangkok and upcountry towns as well as the rapid expansion of the city at the end of the Chulalongkorn Reign. He was a driving force behind and a design consultant to the foundation of the King Chulalongkorn Memorial Hospital and medical education in the country. Finally, he was an eyewitness of the national trauma caused by the passing away of HM King Chulalongkorn.