Save for Later
SIMILAR BOOKS Show All
M.C. Subhadradis Diskul

Art in Thailand: A Brief History 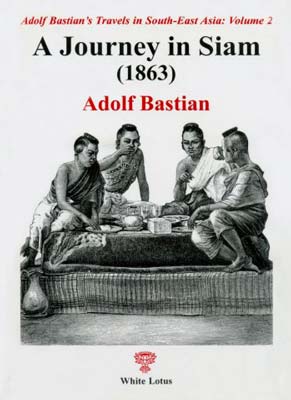 A Journey in Siam (1863) contains the travelogue written by Dr Adolf Bastian during his travels in Thailand. Bastian was a renowned ethnographer, who founded both Berlin’s Museum für Völkerkunde (Ethnological Museum) and the Berlin Anthropological Society, and his work contains valuable observations and interpretations by one of the pioneers of ethnography. He observes, describes and records the later period of King Mongkut’s reign, which ended in 1868 and is not well covered by published sources—only Monsignor Jean-Baptiste Pallegoix’s writings deal extensively with the early years of that reign. While staying in Bangkok, this thorough and tireless German scholar insisted on learning Siamese and, in addition, covered almost every aspect of the spiritual life of the various groups of people he met in the capital. Bastian’s interests also extend to Siam’s administrative and legal systems as well as to the particularities of the lives of the various types of slaves in the country. Celebrations, games, gambling, diseases and medicine, taxes and their implications for economic life all command his attention. Bastian furthermore takes interest in the theater and literature of the time, in Siamese wit, and in the songs that people use to express their feelings during various activities. He provides details about the animals living alongside people either as pets, or in the wild, or as working animals. The book includes some rare descriptions not found anywhere else, not even in Pallegoix’s largely complementary work, relating, for example, to the spirit world as perceived by the Siamese.
USD 27.50