Save for Later
SIMILAR BOOKS Show All
Beamish, John 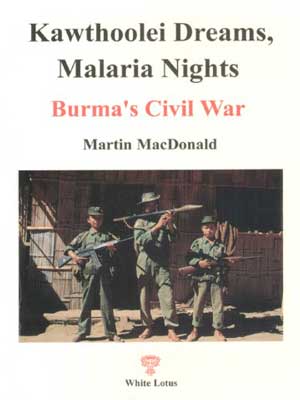 This daring book, the most accessible contemporary account of Burma’s civil war, unravels a complex story that encompasses more than a dozen armies, scores of ethnic groups, involves the opium warlords of the Golden Triangle, and the rise of the democracy movement inside Burma. For the last 50 years Burma has been torn apart by political and ethnic insurgencies, shut off from the outside world, and forgotten. Today the country is ruled, as it has been since 1962, by a brutal, corrupt, and incompetent military dictatorship. The author, a freelance journalist, made his first trip into insurgent Burma in 1989. Since then he has traveled extensively, both alone and with insurgent groups, including an overland trip in the company of Karen and Burmese student soldiers to the Andaman Sea, a clandestine boat trip down the Irrawaddy River, a jungle trek in search of rhinos, and an attempt to photograph Burmese slave-labor camps. This fast-paced and personal narrative captures both the romance and harsh reality of an ill-fated revolution. The plight of the Karen, an ethnic group fighting for a homeland in the malaria-stricken mountains of southeastern Burma, is especially poignant. The old Karen veterans, who served under the British during World War II and began the present rebellion in 1949, together with two subsequent generations, are still in the jungle, but now forced into refugee camps and ever-shrinking parcels of Karen-held territory along the Thai-Burma border.