Petchburi Goldsmiths: Past and Present 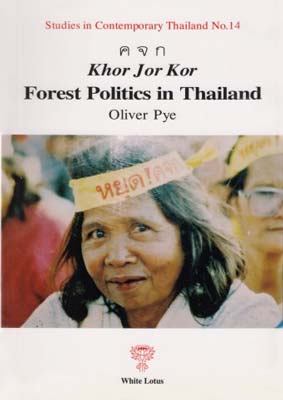 Studies in Contemporary Thailand No. 14

This book analyses the development of Thai forestry from the founding of the Royal Forest Department in 1896 up to the present day, focusing particularly on one of the most controversial state forestry programs in Thai history, the military-led Khor Jor Kor project (1990-1992). The Khor Jor Kor project aimed to reorganize land use in all of Thailand’s 1,253 National Forest Reserves. Behind the project was a powerful alliance of army generals, forestry officials, and pulp and paper companies. Had it gone through, thousands of families living in forest areas would have been evicted from their homes to make way for commercial plantations of eucalyptus. However, Khor Jor Kor led to massive conflict and sustained protests. Under the repressive conditions of the Suchinda dictatorship, farmers developed a civil disobedience strategy that finally stopped the project in July 1992. This book tells the story of that resistance movement and argues that it was a key link in the development of democratic forest management alternatives to the prevailing state and corporate models. At the same time, the book takes a fresh look at the historical development of forest politics in modern Thailand. Continuity and change in forestry are explained as the result of the rise and fall of different “strategic groups”, from British teak companies to the Royal Forest Department, from the Thai military to global pulp and paper conglomerates. Issues such as colonialism and the plundering of Thailand’s forests, counter-insurgency and forest villages, conflicts over commercial plantations, the 1989 logging ban, illegal logging scandals and the failure of state reforestation, and the emergence of a vibrant grassroots environmental movement are integrated into a comprehensive framework of analysis that is highly relevant for the debates in global forestry today.
USD 27.50