Knights of the Realm: Thailand's Military and Police Then and Now

Save for Later
SIMILAR BOOKS Show All
Academy of Sciences USSSR, Inst. of Orientalistics

Rise and Fall of the Thai Absolute Monarchy

Thailand: Land of the Free 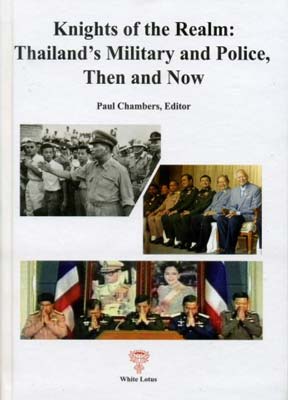 Knights of the Realm: Thailand's Military and Police Then and Now

Chambers, Paul; Knights of the Realm: Thailand’s Military and Police, Then and Now
Represent the first systematic account of the political history of Thailand’s security sector and the main actors involved. The military and police find their legitimacy through law, a safeguarding of monarchy, or a more ambiguous protection of national security ̶̶ ̶̶ NATION, RELIGION, MONARCHY, PEOPLE.
Thailand is a country with over 30 coups and coup attempts since the 1932 revolution which ended the absolute monarchy. As the last direct military putsch occurred as recently as in 2006, security sector involvement in politics is clearly not a thing of the past. Ambiguous laws and spiraling budgets continue to give the security services enormous influence. Ultimately, political machinations by the armed forces and police cannot afford to be ignored if one really wants to understand Thai politics.

With these considerations in mind, the chapters in this edited volume address various questions. Among them are the following: