Save for Later
SIMILAR BOOKS Show All
Guerny, Jacques de

On the Road in Laos

Mekong: A Singular and Remarkable River, An Address to the International Conference Business Opportunities: The Mekong Region Comes of Age, The 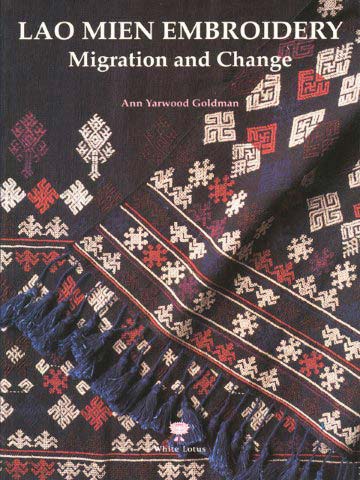 The Lao Mien, a subgroup of the Chinese Yao, lived in relative isolation in northwest Laos until the Vietnam War when great numbers were forced out of their villages and into refugee centers in Laos and later in Thailand. In the 1980s many thousands of them were resettled in the United States, Canada and France. As these emigrations tore them away from age-old traditions their embroidery, an essential skill of every woman, used on all her clothing, began to reflect the changing situation of the Mien. As they came in contact with others, Mien women added new designs and colors to their embroidery. As commercial threads became available, the embroidery became more colorful and the colors more uniform. With reliable incomes, most women now order finished Mien clothing from relatives still in Thailand, Laos and China. The clothing is seldom worn but stored—in the hope that somehow the cultural traditions of the Mien will thus be preserved.