Lord of the Golden Tower, The

Save for Later
SIMILAR BOOKS Show All
Prasit Pongudom

At the Turning Point: Protestant Missionary Records and Thai History, 1828-1873

USD 9.00
Secretariat of the Prime Minister, the

Inscriptions and Images of the Phra Maha That in Lamphun Vol. XLIX, 3/4 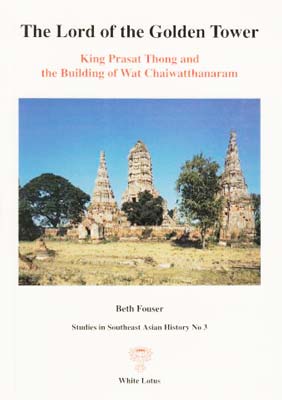 Lord of the Golden Tower, The

King Prasat Thong and the Building of Wat Chai Watthanaram

This book is a study of symbols of power and legitimacy. King Prasat Thong, a usurper, attempted to justify his claim to the throne of Ayutthaya by reviving at Wat Chaiwatthanaram the Khmer-influenced prang in a form that had not been used for two hundred years. The author explores the cultural, historic, political and religious context from which Wat Chaiwatthanaram emerged. She describes its functions on religious and political levels and the interrelationships between Buddhism and kingship and related conceptions of legitimacy. Prasat Thong followed King Ramathibodhi, the venerated founder of Ayutthaya, who had used the prang in his architecture. At Wat Chaiwatthanaram the prang, along with other unusual features, such as the eight conical men (meru), the large crowned Buddha images, and the twelve stucco relief panels, together created a unified visual statement designed to proclaim his ultimate right to reign as King.
USD 16.50