Militia Redux,Or Sor and the Revival of Paramilitarism in Thailand

Save for Later
SIMILAR BOOKS Show All
Eames, Andrew

Thiaw Muang Pra-Ruang: The Literary work of King Vajiravuth about the Ancient King of Sukhothai, Sawankhalok, Uthradit and Phitsanulok 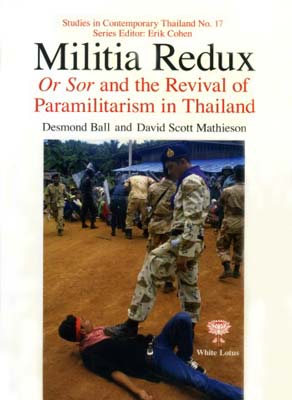 Militia Redux,Or Sor and the Revival of Paramilitarism in Thailand

Studies in Contempory Thailand No. 17

This is a critique of the current resurgence of paramilitarism in Thailand. The central organisation is the Volunteer Defence Corps, or Or Sor. An agency of the Ministry of Interior since the 1950s, Or Sor has a multiplicity of tasks, including maintaining road checkpoints, guarding provincial and district buildings, supervising refugee camps, development assistance, and involvement in the war on drugs. It has also been instrumental in training and supervising rapidly increasing numbers of Village Self-Defence Volunteers (Chor Ror Bor). Since 2002 their numbers have increased in the Thailand-Burma borderlands and in the South, where Or Sor and Chor Ror Bor have become a primary target of the insurgency. Despite a generally improving reputation, many paramilitary personnel are also notorious as thugs for local strongmen, and for corruption and inefficiency. This book is the first in-depth study of this uniquely Thai experience of paramilitarism.
USD 32.00