On Horseback Through Indochina Vol. 3:

Save for Later
SIMILAR BOOKS Show All
Anuman Rajadhom, Phya

Life and Ritual in Old Siam 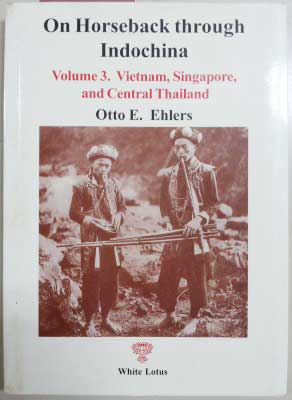 On Horseback Through Indochina Vol. 3:

The third volume of this trilogy provides an account of the adventurous journey German traveler Otto Ehlers undertook in 1892-1893. This work reports on the journey starting in Poofang on the border between the Sipsong Pana, now Yunnan, and French Tonkin, where the Nam Ma is crossed with a small caravan of three mules and the author’s Kashmir pony. Ehlers travels an unusual route between the Black and the Red River and through the tea districts on the Vietnamese-Chinese border, passing through all major settlements of the time: Phong Tho, Barat, Laichau, Lao Kai, Trai Hut, Hong Hoa, Sontay, Hanoi, and Haiphong. Considered a spy by the French officers in Tonkin, Ehlers was forced to continue part of his journey by junk on the Red River down to Hanoi. He then sailed to Da Nang, Saigon, and Singapore, from where he visited the Sultanate of Johore, and onwards to Siam as the guest of H.M. King Chulalongkorn at Koh Si Chang. He also visited Bangkok, Bang Pa In, and Ayutthaya. Ehlers insightfully, mercilessly, and humorously dissects all that meets his inquiring eyes: the deplorable situation of French personnel in Tonkin in respect to life style, living quarters, and hygiene, the German mercenaries in the French Foreign Legion, basically fighting France’s war against the rebels in Tonkin, the true state of the Black Thai irregular troops guarding the country between the Black River and the Red River against Black Flag pirates, the colorful costumes and customs of various tribesmen, trade on the Red River and across the Yunnanese borders, Polish Clara of the Café Oriental in Sontay, the felt need for railway lines in the Shan States and Tonkin, the coal mines of Hongai, the steamers and sailing ships of Rickmers in the Orient, excessive French taxation in Cochin-china, foreign government advisers traveling to idleness in Siam, the livelihood of the Bangkok Siamese, the comings and goings in Sampeng, Bangkok’s Chinese district, Siamese theater, the cremation grounds for the poor at Wat Saket, and many other colorful descriptions cast in Ehler’s own brand of travelogue writing.
USD 19.00