Save for Later
SIMILAR BOOKS Show All
Robinson, M. & L. A. Shaw

We Flew Without Guns

Journey Through Burma in 1936 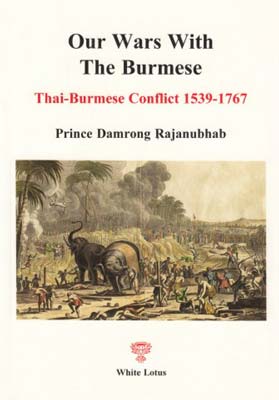 This may well be Thailand’s most famous history book. Known familiarly as Thai Rop Phama, it was first published in 1917 and quickly became very popular. The author gave the state he had just built a new national history by recounting 24 wars between Siam and Burma from 1539 to 1767. The book was later translated into English by a Burmese who had worked for Siam’s forestry department, and who had helped Prince Damrong with Burmese source materials. The tales which Prince Damrong selected from the chronicles have since entered school textbooks and popular culture. It was this book which first made famous the heroism of Queen Suriyothai, the elephant duel at Nong Sarai, King Naresuan’s “declaration of independence,” the guerilla resistance of Bang-Rachan, and the drama of Ayutthaya’s fall.