Politics of Ruins and the Business of Nostalgia

Save for Later
SIMILAR BOOKS Show All
Grand Palace

Guide to the Grand Palace

Artistic Heritage of Thailand, the

Adjustment of Mortality Statistics and Life Table Construction in Thailand 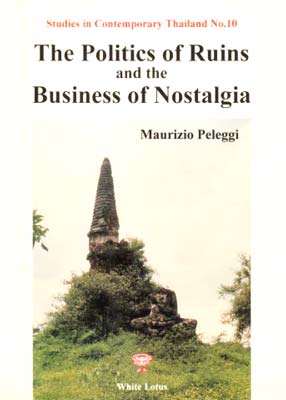 Politics of Ruins and the Business of Nostalgia

Studies in Contemporary Thailand No. 10

This book investigates the theory and practice of heritage conservation in Thailand, focusing in particular on the period from the mid-1970s to the late 1990s. Although the trend towards historic preservation first appeared in Thailand at the end of the nineteenth century and was further promoted by the nationalist regime of the 1940s and 1950s, it has become a major governmental undertaking since 1977 when the first historical park projects were launched. National pride and international awareness of Thailand’s cultural heritage have increased considerably in recent times. This monograph questions the commonplace glorification of historic sites as tangible signs of the past glory of the Thai nation. The state-sponsored material and discursive practices that have led to the institutionalization of Thailand’s national heritage are examined, along with their contestation by elements of civil society, vis-à-vis the process of political and social change. The book also analyzes the commodification and consumption of heritage sites as tourist attractions, as well as the linkage between the promotional narratives of tourism advertising and the official historical narrative of the Thai nation.
USD 14.50