Relation of the Voyage to Siam

Save for Later
SIMILAR BOOKS Show All
Van Gorkom, Nina 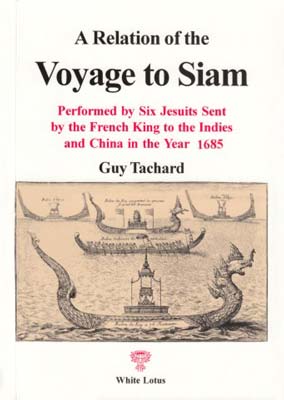 Relation of the Voyage to Siam

The book describes the first French Embassy to Siam in 1685. The Embassy which set out on March 1685 was a remarkable event. It was triggered by the express request of the Siamese King Phra Narai, who for years had been extraordinarily interested in making contact with the King of France. Already at the end of 1680 Narai had sent a fully-fledged embassy to France on the Soleil d’Orient, a vessel of the French Oriental Company but this attempt ended disastrously when the ship foundered near the eastern coast of Madagascar with the loss of all people and its valuable cargo. This book, Guy Tachard’s first, was quite influential. It was the first of a large number of French works concerning late-seventeenth century Siam. Apparently, it was avidly read: the first three French editions date from 1686, 1687 and 1688, the first edition in the Dutch language dates from 1687, this English version appeared in 1688 and an Italian edition came out in 1693. When Engelbert Kaempfer visited the Dutch trading station at Ayuthia in June and July 1690 he annotated the book and his later writing on Siam shows that he benefited from some of Tachard’s observations. It was a work that helped stimulate the French appetite to invest in a short-lived military adventure. This book still deserves attention, its mixture of scientific curiosity, methodic enquiry and religious zeal is typical of the period. It is an exemplary document on Siamese seventeenth-century culture.
USD 24.50