Searching for the Sources of the Irrawaddy

Save for Later
SIMILAR BOOKS Show All
Singh, Langpoklakpam Suraj

Movement for Democracy in Myanmar

Old and New Tapestries of Mandalay

Cries from Insein: A Report on conditions for Political Prisoners in Burma's Imfamous Insein Prison 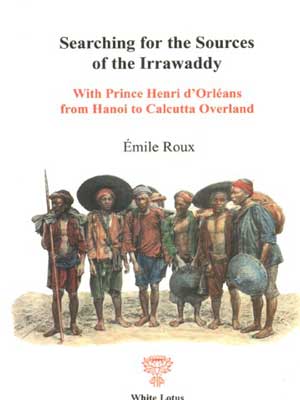 Searching for the Sources of the Irrawaddy

Roux’s account is one of the reports of an overland trip from Hanoi to Calcutta through an area that was identified as containing the sources of the Irrawaddy River as well as those of some of the other great rivers of Indochina. The expedition was under the leadership of Prince Henri d’Orléans and the author, a geographer, was one of his two French companions. The book elaborates on the trade routes of the region and on the various tribesmen living in the localities the expedition passed through. Tibet and the Salween River Valley are among the new territories described by this French expedition, together with the Upper Mekong Valley which was then unexplored by Westerners. Numerous new species of monkeys, birds, and other animals and plants were collected. The main contribution of this travelogue however, lies in the geographical work of the author and in his determination of the exact location of the sources of the Irrawaddy River.
USD 27.50