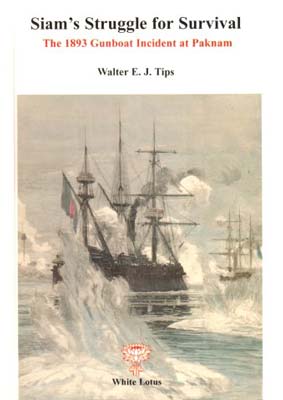 This study tells the story of the French attempts to take over Siam in 1893. The battle between French warships and Siamese guns at Fort Paknam, on the mouth of the Chao Phya River, is told in the words of one of the main actors in the diplomatic struggles that preceded and followed the incident. Gustave Rolin-Jaequemyns’s daily journal of the political maneuvering between France and Britain, the battles on the Mekong between French and Siamese troops and of the sleepless nights of HM King Chulalongkorn and his princely ministers, reads like a political thriller. The report of Siamese counter-attacks and diplomatic plotting, in which Prince Devawongse was the main actor, sheds light on hitherto unknown but crucial pages in the life of Siam as a modern nation in the making. Siam would preserve its independence and HM King Chulalongkorn would manage to hold on to most of the core territories of the kingdom in the Franco-Siamese Treaty of 3 October 1893 which followed the incident. Here is the story of a Siam dangerously close to losing her freedom.