Textiles of the Daic Peoples of Vietnam 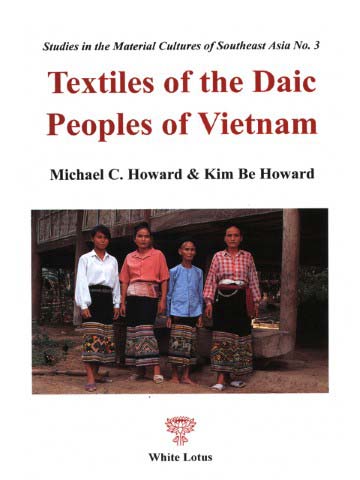 Textiles of the Daic Peoples of Vietnam

Studies in the Material Cultures of Southeast Asia No. 3

The first thorough survey of the textiles of the peoples in Vietnam who speak Daic languages. This is an important addition to the existing literature on the textiles of Tai and other Daic-speaking peoples of Southeast Asia. The Daic peoples in Vietnam are divided into thirteen official ethnic groups. The largest of these is the Thai ethnic group, which numbers over one million people and includes a number of sub-groups such as the Black Tai, White Tai, Tai Thanh, Tai Muang, and the Tai of Muang Daang. Other groups include the Kadai speaking Laha, Lachi, Co Lao, and Pupeo, and the Tai speaking Cao Lan, Tay, Nung, Bouyei, Zay, Tu Zi, Lao, and Lue. The book provides background on the history and culture of these groups and discusses their weaving and dress traditions. In addition to numerous black and white photographs, this book presents 295 new color photographs illustrating the peoples and their textiles.
USD 46.50