Save for Later
SIMILAR BOOKS Show All
Palm Leaf Text Studies Program A Joint Project Between the National Museum of Ethnology Osaka,.

Tribesmen and Peasants in North Thailand 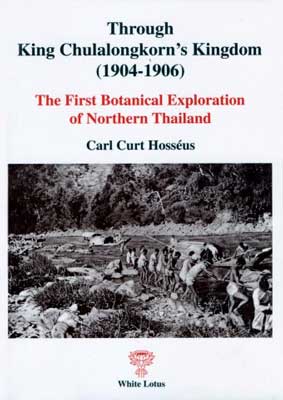 This is the report of a German expedition conducted by Dr. Carl Curt Hosséus to northern Siam in 1904-1906. The author was a professional botanist and aimed to explore the still virgin forest stands and jungles in such mountainous regions as the Wang Chao area and the Khao Phra Dang mountains of Tak province, the Mae Ping river valley, Doi Suthep, Doi Inthanon, and Doi Chiang Dao in Chiang Mai province, Muang Fang, Chiang Sen and its ancient temples, the road from Chiang Sen to Chiang Rai, and the Huay Sai-Chiang Kong region on the Mekong. There are numerous discoveries of new plant species, as could be expected, and extensive commentary on local environments of vegetation associations. The author does not stop there but offers insights into the local situation of various tribes such as the Shan and Mussoer and the former’s insurrections against central rule, the waning power of local rulers, the old chaos, and the operations of large logging companies, such as the East Asiatic Company, the destruction of the environment by forest fires, the operations of American missionaries in the north, budding French administration in French Laos, the development of a modern upcountry corps of gendarmes under Danish leadership, and the growing trade interests of Britain and Germany. This straightforward and detailed report shows us the problems associated with mounting an expedition, even one with limited objectives and with only one foreigner. The local flavor of villages and towns is colorfully described and illustrated with more than ninety period photographs.