Save for Later
SIMILAR BOOKS Show All
Fickle, Dorothy H.

Images of the Buddha in Thailand

Land of the Yellow Robes: Revisited 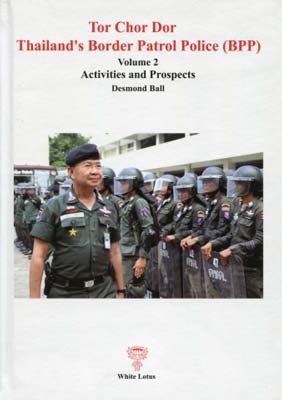 Ball, Desmond; Tor Chor Dor: Thailand’s Border Patrol Police Volume 2: Activities and Prospects
Tor Chor Dor: Thailand’s Border Patrol Police (BPP) is an exhaustive two-volume study of the Tamruat Trawen Chaidaen (Tor Chor Dor or BPP), which is clearly the most professional of all Thailand’s paramilitary organizations. Volume 2 provides detailed information about the BPP’s current activities. Among the topics discussed are the legacy of the BPP’s relationship with the U.S. CIA, the BPP’s relations with the palace and the royal family, the organization’s role in border security and nation building, and human rights aspects of the organization’s activities. One chapter discusses the BPP’s role in securing Thailand’s deep South, where separatist tensions among the region’s Muslim population continue to simmer. The author also considers future prospects for the Border Patrol Police.
Volume 1 discusses the BPP’s history, organizational structure, facilities and equipment, and personnel recruitment and training. The primary underlying aim of this study is to continue the argument for rationalisation of paramilitary organisations in Thailand and make the case for expeditious enhancement of the BPP. The Foreword has been contributed by Police General Vasit Dejkunjorn (Retired), former commander of the BPP's Training Division and former chief of the Royal Court Police.