Visions of a Nation: Public Monuments in Twentieth-Century Thailand 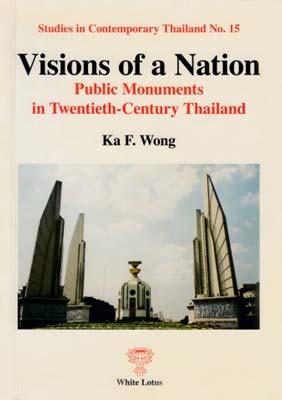 Visions of a Nation: Public Monuments in Twentieth-Century Thailand

Studies in Centemporary Thailand No. 15

This book offers a unique discourse on modern Thai history through the exploration of monumental images and narratives. Visible to the people on an everyday basis, public monuments are the visual manifestation of how the Thais have imagined and re-imagined their nation-state in the last century. Thailand was the only country in Southeast Asia to retain its political independence during the age of colonialism, and hence, the only nation to use public art in support of indigenous political goals. From absolute to constitutional monarchy, the two World Wars to the Cold War, and military dictatorship to the emergence of people’s democracy, different regimes erected public memorials to legitimize their own rule and promulgate their own concepts of modern Thailand to the people. Grouping the most renowned monuments into four visions—Absolute Monarchy, Modern Nationalism, Traditionalism, and Diversity, this book explains how Thai artists use scale, style, and symbol to reinterpret historical events and produce political effects on one hand and create works of beauty on the other. An innovative synthesis of political, cultural, and art history, this book brings not only a new relevance to the many public monuments seen throughout the country but also a fresh understanding of complex twentieth-century Thai society.
USD 24.50