Save for Later
SIMILAR BOOKS Show All
Jennar, Raoul M. 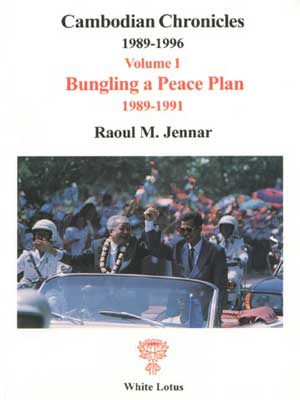 This first volume brings together all the reports (both published and unpublished) written by Raoul Marc Jennar on Cambodia’s political, economic, military and diplomatic situation from the beginning of the peace talks until the signing of the Paris Agreement in 1991. It was these reports that contained the first announcements of various major developments affecting the route towards peace. These included, in 1990, the ending of Soviet Bloc aid to the Phnom Penh regime; the conflict in the same year between the two main wings of the Communist party in power and the end to the opening up of the political spectrum; the economic colonization of Cambodia by unscrupulous Thai businessmen; and the continuation, after the signing of the Paris Agreement in 1991, of the collaboration between some elements of the Thai military and industrial establishment and the Khmer Rouge. These reports were also the first to denounce the shortcomings, the contradictions and the weaknesses of the Agreements that were being negotiated.