Save for Later
SIMILAR BOOKS Show All
Dumarcay, Jacques

Measured Art, the: A Proportional Analysis of Early Khmer Sculpture 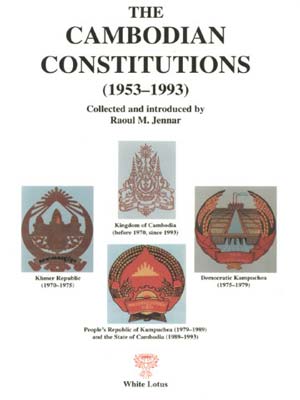 This book examines the six constitutions Cambodia has had since its independence in 1953. What are the Cambodian institutions today?
What are the powers of the King?
How is the succession to the throne ensured in an elective monarchy?
Are human rights protected in a country where the worst of crimes against humanity have been committed?
How independent is the judiciary?
The new Constitution, promulgated on 24 September 1993, answers these questions. This collection, where each of the fundamental laws is placed in its historical perspective, includes the founding texts of the first independent Cambodian Kingdom, the Khmer Republic of Field Marshal Lon Nol, Democratic Kampuchea of Pol Pot and the Khmer Rouge, Heng Samrin’s People’s Republic of Kampuchea, and Hun Sen’s State of Cambodia.