Confessions of A Eurasiam Women

Save for Later
SIMILAR BOOKS Show All
Ngoc, Phan

Sino-Vietnamese Words and Their Semantics 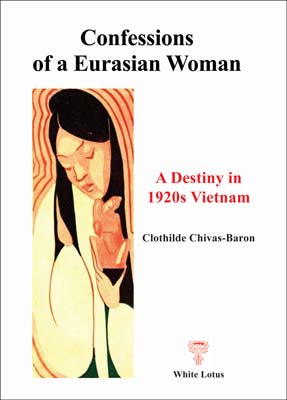 Confessions of A Eurasiam Women

Confessions of a Eurasian Woman. A Destiny in 1920s Vietnam is the story of the emotional life of a mixed-blood Franco-Vietnamese woman. The story is also a vehicle for the author, a long-time resident of French Indochina, who arrived there in 1909, to campaign on behalf of the better treatment of mixed-blood children. The intricate plot reads like a psychological thriller following the feelings of revenge for discrimination suffered and the inner struggles of a Eurasian woman. Children of mixed marriages were often the illegitimate offspring of Vietnamese mistresses and high officials, but also the children of Frenchmen who held less exalted positions in the colony, the so-called colons who sought a better future than they would have had in France. How were these mixed-race children educated? What could they expect after growing up? Did they all desire to get to Paris however they could? As a very early feminist the author did not fail to comment on the life of French colonial women too. In passing, she records impressions of official, business and social life, and of such places as Hué, Saigon and Angkor Wat, always worthy of a vacation, if not from work then from the daily struggles against discrimination.