On Horseback Through Indochina Vol. 2:

Journal of Burma Studies Vol. 5, The 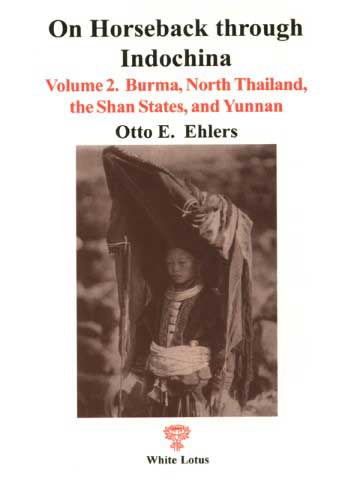 On Horseback Through Indochina Vol. 2:

The book provides an account of the adventurous journey German traveler Otto Ehlers undertook in 1891-1892. This volume chronicles the journey starting from Moulmein on Burma’s Andaman Sea coast and ending in Poofang on the border between the Sipsong Pana, now Yunnan, and French Tonkin, now Vietnam. Ehlers travels an unusual route; with intent to wander away from the itinerary followed by earlier explorers. Traveling without passports or official laissez-passers, but with letters of recommendation from Prince Damrong, Siam’s Minister of the Interior, and the British Consul in Chiang Mai, Ehlers cunningly used the locals’ fear of officialdom and his own imagination. His skillful use of both helped him evade all kinds of impositions, calamities, and problems in dealing with food supplies and means of transportation to cross through British and partly Chinese-claimed Shan States from Chiang Rai in Siam to Chiang Tung. When Ehlers and his party were refused entry by Chinese officials coming from Yunnan, he set off at night, headed for the border with France’s Tonkin colony, and escaped through the tea gardens of Ybang in the Sipsong Pana. In the Shan States Ehlers observed the annual rocket firing competition and describes market towns and mule-caravans plying the Yunnan-Burma trails. Along his journey, Ehlers finds the time to observe and record what strikes him as unusual or at variance with other accounts of the numerous tribes and cities in the area. Hundreds of singular encounters with people are described and the logistics of shoestring traveling are documented in a unique and colorful style.
USD 19.00