Spirits of the Yellow Leaves: The Enigmatic Hunter-Gathers of Northern Thailand, The 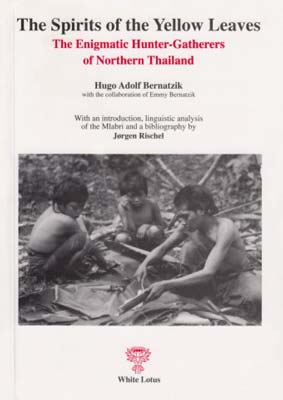 Spirits of the Yellow Leaves: The Enigmatic Hunter-Gathers of Northern Thailand, The

A colorful travel account and documentary work by the Austrian ethnographer and photographer Hugo A. Bernatzik. First published in German in 1938 under the title Die Geister der gelben Blätter it is long since out of print. This is an important work for several reasons and it is certainly worth publishing again. In the years 1936-37 Bernatzik traveled in both Southern and Northern Thailand and the southern fringe of the Shan State, with a final excursion into Vietnam. In his book he gave interesting accounts of the ethnic groups he visited, Moken, Akha, Lisu, Biet and others, all documented with outstanding photographs of lasting historical value. In the present edition additional photographs from Bernatzik’s collection have been added. The work now appears in two volumes. The core of the present volume is a large section on an enigmatic and notoriously shy hunter-gatherer tribe called “the Spirits of the Yellow Leaves”. This ethnic group still exists both in Thailand and Laos, though it numbers only some 300 people. It is nowadays referred to as the “Yellow-Leaf People” or as Mlabri (Mla’ Bri’, literally: “forest people”). In his Introduction to the volume Jørgen Rischel places Bernatzik’s intriguing account in the context of earlier and recent research. For decades there was controversy over the authenticity of his data; Rischel shows that the criticism was beside the point. Bernatzik took down a short word list in imperfect notation, which has vexed linguists ever since. Rischel has identified almost all words on the list as belonging to the language still spoken by the Mlabri. The complete analysis presented here has not been published elsewhere. It will be of particular relevance to comparative Mon-Khmer research, but it is also of general interest since the vocabulary reflects culture and gives evidence of how this ethnic group traditionally viewed the world. Jørgen Rischel is professor emeritus in general linguistics and phonetics, University of Copenhagen, and was a guest researcher at Mahidol University. Since 1982 he has been doing fieldwork in Thailand and Laos. His monograph Minor Mlabri appeared in 1995.