Throne of the Gods: An Account of the First Swiss Expedition to the Himalayas, the

Save for Later
SIMILAR BOOKS Show All
Bedi, Ramesh

Land of the Eye 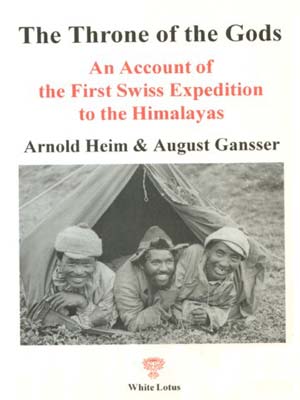 Throne of the Gods: An Account of the First Swiss Expedition to the Himalayas, the

Originally published in German in 1938 and in English in 1939, this account was written by two geologists whose eight months journey in the Himalayas took them through the then “forbidden” lands of Nepal and Tibet, culminating at Mt. Kailas, “The Throne of The Gods”. Apart form their geological studies, altitudes were measured by using barometric observations. The lives of the people, animals, and plants were recorded, both among the crags and glaciers of the high mountains and also on the way there through the plains and foothills of India. The return journey included a visit to the source of the Ganges. A wealth of period photographs and maps makes this book a valuable resource for naturalists, geologists, and mountaineers. With a new foreword by August Gansser.