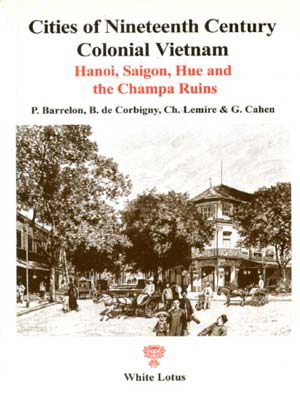 This compilation volume provides reports by various French writers on the early development of the French colony of Indochina, present-day Vietnam. Pierre Barrelon’s (1859) account of the colonial history of Cochin-china, the southern part of Vietnam, is supplemented by an 1892 article on the considerable developments that took place in Saigon. Diplomat Broassard de Corbigny (1878) provides descriptions of Hue and of his audience with King Thu-Duc of Annam when the exchange of a treaty with France sealed the fate of Annam, the middle part of present-day Vietnam. Charles Lemire presents an overview of the rich Cham monuments, virtually the only remnants left of an indigenous culture displaced by the Vietnamese. Finally, after France marched into the northern part of Vietnam, then called Tonkin, it took development firmly in hand and established railway lines, roads, and educational and administrative buildings and systems. Gaston Cahen saw these developments in 1905 and reported on them and the ideas behind them. The reports are richly illustrated with engravings and period photographs.