French Engineer in Burma and Siam (1880)

Save for Later
SIMILAR BOOKS Show All
Taylor, Robert H.

State in Burma, The 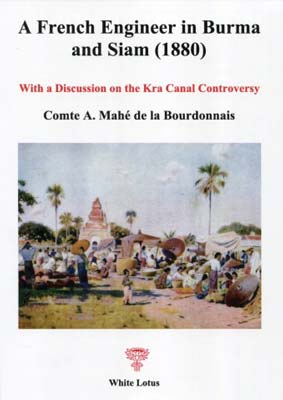 French Engineer in Burma and Siam (1880)

A French Engineer in Burma and Siam (1880), With a Discussion on the Kra Canal Controversy contains a number of discussions on all that a French engineer, hired by the English in Burma, met with during his stay. He was a municipal engineer in Bassein to deal with the aftermath of an earthquake, an engineer undertaking the construction of a telegraphic line between Siam and Burma, a political commentator on the Kra Canal on the Malay Peninsula and an engineer in charge of mines in English Burma. He was also a keen observer of what the English had been achieving or not in Burma just before they staged a Third War in Burma. Chapters on history—of a politically tainted, pro-French variety—offer a sound perspective on the colonial politics of the time. Where he was residing and travelling he was also a keen observer of local customs so different and new for a European in the Far East. The author describes the high status of women in Burma and marriage customs too. The ethnic groups of Burma are especially in his focus. Of special interest too are his observations on work and travel in Burmese jungles and the prevalence of large animals such as tigers, leopards and panthers, the hunting of which was necessary to protect workers. After King Thibaw had been deposed he was eager to revise the first editions of his book, playing in the period 1880-81, with new material and political commentary. In this discussion the role of Siam and the great valley of the Chao Phraya or Menam River as a route to Yunnan, figure prominently. For the third revised and expanded edition, which is presented here, he also updated the discussion on how best to realize the shortcut offered by the narrowness of the Kra Isthmus. A project he presented to King Chulalongkorn. F. de Lesseps, of Suez Canal fame, worked on the pilot study contained in this book.