Save for Later
SIMILAR BOOKS Show All
Lao Insight Books

Laos in the 1920s: The Gods, Monks and Mountains of Laos 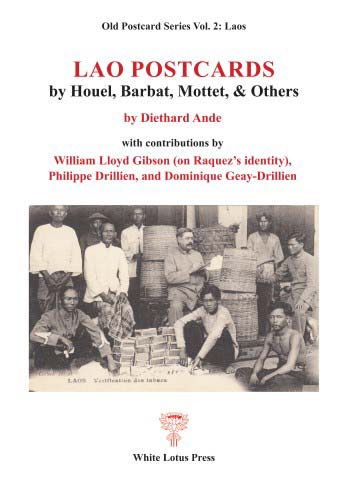 Lao Postcards by Houel, Barbat, Mottet, and others is the volume 2 of the Old Postcard
Series.
This volume covers five postcard publishers who produced Lao postcards: Houel, G.
Barbat, Mottet & Cie, La Maison d’Art Colonial,
Edition de la Cie Coloniale du Laos and a collection of Lao maps on postcards
Houel was a customs officer in Southern Laos and his postcards reflect his work with some
unique photos hardly shown on other postcards
He is one of the few one-country postcard photographer and publisher, like Raquez was.
G. Barbat published nearly only hunting postcards shot in southern Laos, northeast
Cambodia and Cochinchina. He can be regarded as a one-topic publisher and also only in
one area
Both publishers have in common, that all are personal photos
Mottet was a publishing house of postcards of the Indochinese countries as well as a trading house and its photos were made by different photographers who are not recorded
The other two publishers were promoters of French colonies. La Maison d’Art Colonial
produced series of 20 cards each of many colonies.
Here only Laos and Cambodia are shown. And a separate series only covers only Angkor
in Cambodia
Edition de la Cie Coloniale du Laos (Ventiane) is also a one country postcard publisher
The map section is a collection of maps on postcards done by different publishers and for
Different purposes like postcards and also advertising cards for certain products
Besides the sections covering the publishers seversal articles analyze different aspects of
the postcards and compare them with other cards
As Barbat deals with hunting cards, some contributions also cover cards made by Defosse,
a hunter and some other hunting cards by Decoly
(whose cards also prominently covered in volume 1, as he duplicated many of Raquez
postcards under his brand Decoly and also La Pagode)
And the most important article deals with new information of Alfred Raquez, the foremost
publisher/photograph of Laos. William Gibson discovered his real name and identity. This is
also a correction of information given in volume 1: Lao Postcards by Alfred Raquez