Save for Later
SIMILAR BOOKS Show All
Burma Gazetteer

Detail on the Burma Front, A

Letters to a Dictator, Official Correspondence from Nld Chairman U Aung Shwe to the Slorc's Senior General Than Shwe, from Dec. 1995 to March 1997 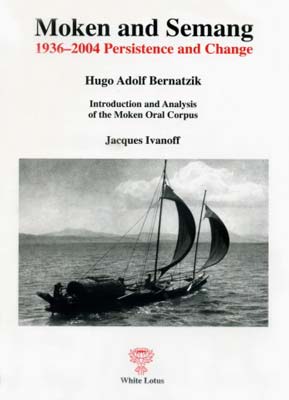 This is a new edition of the first part of the Austrian ethnographer and photographer Hugo A. Bernatzik’s work The Spirits of the Yellow Leaves. Bernatzik’s famous book on minorities in Thailand and beyond was originally published in 1938 and appeared in English translation in 1958. This first part was titled Mergui and South Thailand. Jacques Ivanoff, a CNRS scholar, who has been studying the Moken for a number of years and written several books on these so-called “sea-gypsies”, introduces the present volume with an analysis of Bernatzik’s work. He also deals extensively with the situation of the Moken today, sixty years after Bernatzik did his study. Ivanoff describes how the Moken survived the Tsunami of December 2004, explaining how their preservation of traditional knowledge and culture enabled them to understand what happened at sea, before the disaster struck. The second part of Bernatzik’s work is published separately under its original title, with an introduction of author and work by Prof. Jørgen Rischel, who also analyzes Bernatzik’s data on the Mlabri language.      The two most extensively documented ethnic groups in Bernatzik’s work, the sea-based Moken and the jungle dwellers Mlabri, are of Malay and Mon-Khmer affiliation, respectively. Each group occupies a niche away from the mainstream societies, and they have done so for a long time, most likely on their own will.