Travels in Upper Laos and Siam, with an Account of the Chinese Haw Invasion and Puan Resistance

On the Road in Laos

Heroes Who Fell from Grace, The 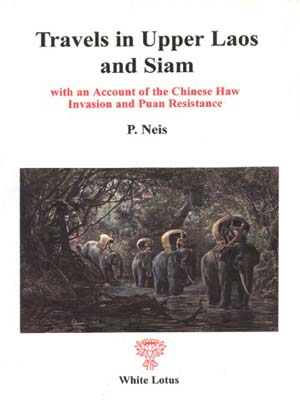 Travels in Upper Laos and Siam, with an Account of the Chinese Haw Invasion and Puan Resistance

A report of an exploration undertaken in 1882 in Upper Laos and the border areas between British Burma, China, Vietnam and Siam by Dr Neis under the auspices of the French Minister of Public Education. Searching for knowledge about the local tribes and a commercially viable trade route from the Mekong valley to Annam or Tonkin (present-day Vietnam), Dr Neis met the Puan people fleeing from armed Chinese Haw bandits who had destroyed the Puan kingdom and threatened to invade large parts of the valleys that are the Laotian tributaries to the Mekong. Dr Neis found himself in dire straits, fleeing in turn from the approaching Haw and eventually returning to Luang Prabang. He explored the Nam Ou valley in Central Laos and described the local customs. From Luang Prabang, he undertook the exploration of the Siamese vassal states in the present-day Golden Triangle, and, besides the flourishing opium trade, also found the British traders doing well. Descending through Chiang Rai and Chiang Mai, he provided a prophetic picture of expanding British interests and of the struggle between the local northern vassals and residents sent by the Bangkok government of King Chulalongkorn.