Save for Later
SIMILAR BOOKS Show All
Jacques, Claude

Excavation at the Sisattanak Kiln Site, Vientiane, Lao Pdr, 1989, An

Further Travels in Laos and in Yunnan Vol. 2 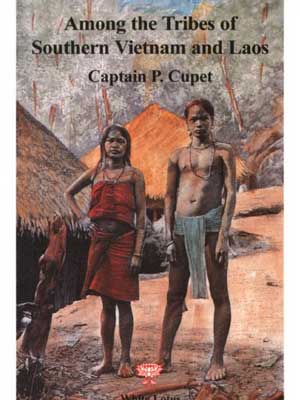 "Wild" Tribes & French Politics on the Siamese Border (1891) (First English translation from 1893)
This book reports a chapter of Franco-Siamese politics played out in 1890-91 among the independent tribes inhabiting the crossroads between French Southern Vietnam, Cambodia and Laos. Since various semi-independent states in present-day Southern Laos and Cambodia were under the sovereignty of, and paid tribute to, the King of Siam, Siamese military units were once again confronting the dominant colonial power, France, at the borders. The author, Captain P. Cupet, was a member of the famous Pavie Mission and studied the politics as well as the ethnography and anthropology of the tribes for years. So his report incorporates significant material on such tribes as the Radé, the Djiaraï, the Davak, the Cédang, the Brao, the Bahnar and many smaller tribes. His pictorial material is outstanding and unrivalled as a record of the peoples that, in the 1960s, during the struggle for the forest trails in the next Vietnam war, would enter big power politics once again. Accompanying maps by Auguste Pavie can be found in the Atlas of the Pavie Mission.